Over the years we have been privileged and honored to publish amazing authors like Lewis V. Baldwin and Rufus Burrow Jr. who are renowned King scholars. We offer this essential reading list featuring Burrow, Baldwin, and more as we reflect on Dr. King's life and legacy. 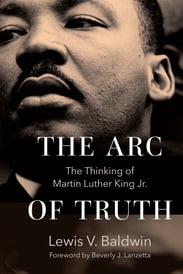 The Arc of Truth
The Thinking of Martin Luther King Jr.

Martin Luther King Jr. said and wrote as much or more about the meaning, nature, and power of truth as any other prominent figure in the 1950s and '60s. King was not only vastly influential as an advocate for and defender of truth; he also did more than anyone in his time to organize truth into a movement for the liberation, uplift, and empowerment of humanity, efforts that ultimately resulted in the loss of his life. Drawing on King's published and unpublished sermons, speeches, and writings, The Arc of Truth explores King's lifelong pilgrimage in pursuit of truth.

Lewis Baldwin explores King's quest for truth from his inquisitive childhood to the influence of family and church, to Morehouse College, Crozer Theological Seminary, Boston University, and other academic institutions in the Northeast. Continuing on, the book follows King's sense that he was involved in experiments of truth within the context of the struggle to liberate and empower humanity, to his understanding of the civil rights movement as unfolding truth, to his persistent challenge to America around its need to engage in a serious reckoning with truth regarding its history and heritage. Baldwin investigates King's determination to speak truth to power, and his untiring efforts to actualize what he envisioned as the truthful ends of the beloved community through the truthful means of nonviolent direct action. King believed, taught, and demonstrated by example that truth derives from a revolution in the heart, mind, and soul before it can be translated into institutions and structures that guarantee freedom, justice, human dignity, equality of opportunity, and peace.

Ultimately, King's significance for humanity cannot be considered only his contributions as a preacher, pastor, civil rights leader, and world figure—he was and remains equally impactful as a theologian, philosopher, and ethicist whose life and thought evince an enduring search for and commitment to truth.

Martin Luther King used news cameras as a means of exposing anti-Black violence by white mobs in the 1950s and 60s. Darnella Frazier used her phone to record and post the murder of George Floyd by Derek Chauvin in May 2020. These are just two of many people who have captured images of injustice for the world to see.

The Prophetic Lens takes an important look at the use of the video camera as an indispensable prophetic tool for the security of Black lives and greater possibility for racial justice. Phil Allen shows how the camera can be a catalyst for cultural change, using Walter Brueggemann's Prophetic Imagination as a framework for understanding the concept of "prophetic." Chronicling the use of the camera, particularly in film from J.D. Griffiths' Birth of a Nation to Spike Lee's Do the Right Thing, Allen's historical approach reveals how effective this technology has been in achieving the goals of its respective storytellers.

The book highlights both the prophetic potential of the camera and the context of Blackness as a liminal existence amid a context dominated by whiteness.

In 1970, C. T. Vivian, a close colleague of Martin Luther King, Jr. and a member of his executive staff, sat down to take stock of the civil rights movement and the progress it had made. His assessment was that it failed, and that the blame lay in the existence of myths about America.

As prophetic today as it was 50 years ago, Vivian's voice rings out as a critique and a call to action for a society in deep need of justice and peace.

The civil rights struggle that began when Rosa Parks, a seamstress in Montgomery, Alabama, decided to sit in the front of a bus has deeply altered American society and the American conscience. Yet from several perspectives, that movement has resulted in failure. The Black struggle for independence is more of an uphill climb than ever. Why?

C. T. Vivian asserts that the civil rights movement failed because it was built on certain myths about America:

A Child Shall Lead Them
Martin Luther King Jr., Young People, and the Movement

Half a century after some of its most important moments, the assessment of the Civil Rights Era continues. In this exciting volume, Dr. Rufus Burrow turns his attention to a less investigated but critically important byway in this powerful story—the role of children and young people in the Civil Rights Movement.

What role did young people play, and how did they support the efforts of their elders? What did they see—and what did they do?—that their elders were unable to envision? How did children play their part in the liberation of their people?

In this project, Burrow reveals the surprising power of youth to change the world. 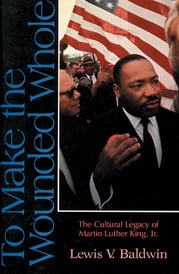 To Make the Wounded Whole
The Cultural Legacy of Martin Luther King Jr.

To Make the Wounded Whole describes how King's black messianic vision propelled him into fateful encounters with other black leaders, the war in Vietnam, black theology and world liberation movements. 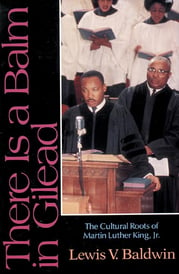 There Is a Balm in Gilead
The Cultural Roots of Martin Luther King Jr.

The sources of Martin Luther King, Jr.,'s phenomenal and prophetic impact on life in America and beyond have never been adequately understood.

In this path-breaking volume, Lewis Baldwin traces King's vision and activism not to his formal philosophical and theological development but directly to his roots in Southern black culture, where King spent most of his 39 years.

King's appropriation of the Bible, Gandhi, American participatory democracy, Boston personalism, and the theologies of Reinhold Niebuhr and the Social Gospel makes sense, Baldwin argues, only against his visceral and abiding identification with black culture and the black Christian tradition. Working directly with the trove of King's sermons, speeches, and unpublished papers, Baldwin has reconstructed the pain and joy, the defeat and triumph King experienced in his formative family relationships, in the black church, in his childhood and education, in his marriage and children, in segregated black Atlanta, and in his leadership of America's civil rights movement.

Baldwin's through research and engaging writing finally give us what King had but Scholars have missed: the sense of place that grounded his vision of the "beloved community." 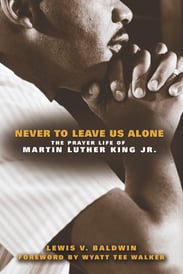 Never to Leave Us Alone
The Prayer Life of Martin Luther King Jr.

Based on years of original research, Never to Leave Us Alone is the first book-length treatment of the prayer life of the famed religious and civil rights leader. Drawing on personal prayers that King recited as a seminarian and graduate student, preacher, pastor, and then civil rights leader, award-winning historian Lewis Baldwin explains how King turned to both private prayer and meditation for his own spiritual fulfillment, and to public prayer as part of his sermonic discourse, as an aspect of his pastoral care, and as a way of moving, inspiring, and reaffirming people in the context of a crusade for equal rights, social justice, and peace.

In the end, Baldwin argues, King's prayer life and reflections offer important keys not only to King the man but also to our own cultivation of core human values. The book includes photographs.

Bonhoeffer and King
Their Legacies and Import for Christian Social Thought

Dietrich Bonhoeffer and Martin Luther King, Jr.— these giants of recent Christian social thought are here reassessed for a new context and a new generation. Both combined activism, ministry, and theology. Both took on public roles in opposition to prevailing powers of their respective causes. Here many of the leaders in Christian social thought revisit the insights, causes, and strategies that Bonhoeffer and King employed for a new generation and its concerns: race, reconciliation, nonviolence, political violence, Christian theological identity, and ministry. 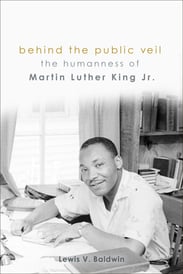 Behind the Public Veil
The Humanness of Martin Luther King Jr.

What was Martin Luther King Jr. really like? In this groundbreaking volume, Lewis V. Baldwin answers this question by focusing on the man himself. Drawing on the testimonies of friends, family, and closest associates, this volume adds much-needed biographical background to the discussion, as Baldwin looks beyond all of the mythic, messianic, and iconic images to treat King in terms of his fundamental and vivid humanness. Special attention is devoted to King’s personal insecurities and struggles, his humility and affinity to common people, his delight in pleasant and passionate conversation, his insatiable love for the precious but ordinary things of life, his robust appetite for artfully-prepared and delicious soul food, his enduring appreciation for music and dance, his cheerful and playful attitude and spirit, his abiding interest in games and sports, and his amazing gift of wit, humor, and laughter.

King emerges here as an ordinary human being who enjoyed and celebrated life to the fullest, but was never bigger than life. Here we see the personal qualities of King—as a real, fleshly human being—and also as a man shaped by his social and cultural experiences and locations. This book reclaims the man behind the mythology. 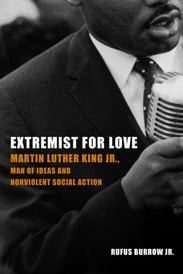 In spite of extensive research and publishing on King, insufficient attention has been given to the convergence of ideas and action in his life. In an era where people are often sorted into the categories of "thinker" and "doer,” King stands out—a rare mix of the deeply profound thinker and intellect who put the fruit of that reflection into the service of direct social action.