In the Black church, it is common to hear a preacher passionately share spiritual, theological, or practical insight during a sermon and then ask the congregation the question, “Can I get a witness?” He or she may substitute that question with phrases like “Help me somebody!” or “Somebody say amen!” As call-and-response is central to the Black church experience (and, one could argue, the Black experience outside of the church context as well), they are tapping into the collective expectation to allow for all and any in attendance to testify. When the Black preacher asks, “Can I get a witness?” she is asking if there is someone out there who agrees with her. “Is there someone who relates to what I’m preaching on this morning? Is there anyone who can testify that what I’m proclaiming is the truth?” When the preacher is done preaching, the same questions and comments could come from the worship leader, who artistically and seemingly effortlessly weaves those questions and statements in between song lyrics sung by either the worship leader, or the choir, or both.

This practice is not restricted to the church context. Marvin Gaye wrote a song called “Can I Get a Witness?” Although it was not written for church, which greatly influenced Gaye, he had the same intentions for his listeners as the pastor did for her congregants. Gaye sings these lyrics:

Listen everybody, especially you girls

Is it right to be left alone

While the one you love is never home?

I love too hard, my friends sometimes say

That a woman should be loved that way

But it hurts me so inside

To see her treat me so unkind

Somebody, somewhere tell her it’s unfair

One could replace a few words, and it would sound like a sermon. Rather than the woman treating him so unkind and unfair, in a sermon, the preacher may speak about life (especially life without a relationship with Jesus) being unkind and unfair, leaving a person to feel lonely and unloved. Gaye echoes the sentiments regarding a woman who has broken his heart. He shares his feelings with great vulnerability, and like the Black preacher on a Sunday morning, he asks if there’s anyone who agrees with him or thinks what he feels and is singing about is true. Is there another person who can relate to him and testify to the pain he feels, his plight, or him deserving better?

The congregation responds in agreement because their bodies have felt or sensed what the lyrics in the song testify to. They have heard painful words, seen suffering, felt in their bodies the hurt from loss or neglect, and even remembered the scents present during the traumatic events. They may not always know cognitively the experience the lyrics speak of, but their bodies often do.

A critical, though inanimate, and technological witness is the camera. It captures the Black experience with objective truth-telling and “testifies” to both the trauma and resiliency of African Americans living amid a violent reality. If I were to personify the video camera or the camera phone, it would be sitting in the figurative congregation of society responding with a resounding, “Yes!” The camera would testify boldly in the public and legal courts. The camera has much to say about the injustices and abuses in the underbelly of the United States that render African Americans vulnerable to continued trauma.2 Its eye has seen the images. The camera is the witness that will attest to the pain and the plight of African Americans while making the case that we deserve better, we deserve justice, and we deserve our collective dignity to be recognized and honored. The camera’s “testimony” is accurate and consistent each and every time it testifies. It can be misinterpreted, depending on who is doing the interpreting, but unedited, it will not give false information. Indeed, it cannot. It cannot be manipulated into giving contradictory testimony. Its content is reliable and compelling. 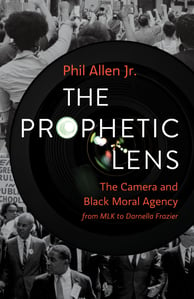 This is an excerpt from the introduction of The Prophetic Lens: The Camera and Black Moral Agency from MLK to Darnella Frasier.

Phil Allen Jr. is a Ph.D. candidate in Christian Ethics at Fuller Theological Seminary. He researches and writes on issues at the intersection of theology/ethics, race, and culture. His book "Open Wounds: A Story of Racial Tragedy, Trauma, and Redemption" was released in February 2021. He is a speaker; poet; documentary filmmaker; and diversity, equity, and inclusion consultant. He is also founder and executive director of Racial Solidarity Project.