Q&A with Lewis V. Baldwin, author of The Arc of Truth 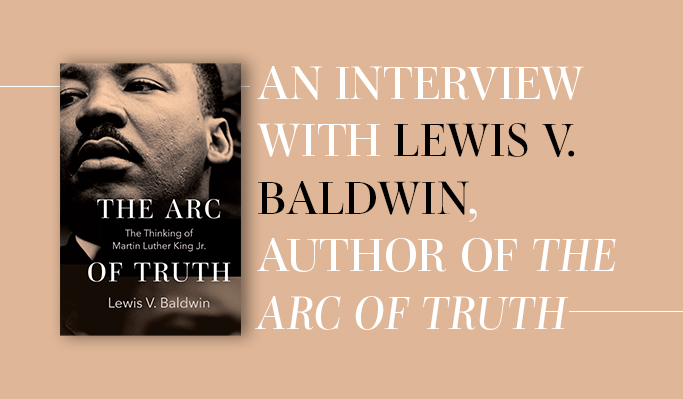 Lewis V. Baldwin, a well-known Dr. King scholar, chatted with us about his new book, The Arc of Truth: The Thinking of Martin Luther King Jr. Lewis speaks on what motivated him to write this book, how he has lived truth in his own life, and the importance of pursuing truth even in what seems to be a post-truth era.

What prompted you to write this book?

I wrote The Arc of Truth: The Thinking of Martin Luther King Jr. for several reasons: First, to establish the point that truth, truth-telling, and truth-sharing always matter in any civilized society and culture, especially if that society and culture are to flourish and survive on a solid foundation of moral and spiritual values. I conclude that Dr. King’s life illustrates this, especially since he grew up and was nurtured in a religious culture that attached supreme value to truth, truth-telling, and truth-sharing.

Second, to highlight the fact that any genuine search for truth is a lifelong pilgrimage. Truth is always unfolding in human life and experiences, as evident, most importantly perhaps, in God’s revelatory activity through the ages and across generations. I view Dr. King as a case study here because he considered the search for truth to be a lifelong and even endless process, especially for truly moral and rational persons.

Third, I felt morally obligated to raise my voice in unity with those academics and religious figures who are writing and speaking about the dangers inherent in what many contemporary cultural and social critics are calling “the post-truth society and world.” We are living in a society and world in which the old rules and standards regarding truth and truth-telling are continuously eroding—a society and world in which even statements of truth and actual facts are in question. Falsehoods have become not only a deviation from the norm but the norm itself, especially among leaders at the highest levels of political and religious life. Many books and articles focus on what is variously described as “the post-truth age,” “the new age of lies,” “the post-fact society,” and “the post-truth world,” and they speak to the twenty-first-century reality of “alternative facts,” “the crisis of truth,” “deliberate deception,” “fake news,” “fictionalized propaganda,” “half-truths,” and “conspiracy theories.” The lingering “big lie” about the outcome of the 2020 US presidential election and the irrational attacks on the 1619 Project and critical race theory are but a few examples of a society that is becoming more and more uncomfortable with the truth about itself, its history, and its heritage.

Fourth, I wrote The Arc of Truth to explain the sheer urgency of the moment confronting us, especially in terms of the need to reclaim the type of values-infused or values-laden culture that cherishes truth, truth-telling, and truth-sharing as moral and rational means that lead to moral and rational ends. We are in real trouble as a nation and world—morally, spiritually, and from the standpoint of our physical well-being and survival—if lying and anti-truth-telling become a completely acceptable and permanent feature of our political, religious, and cultural landscape. We need to reclaim a clear, logical, and shared sense of what is true and untrue, right and wrong, rational and irrational. A culture of anti-truth-telling is not the kind of gift we should pass on to succeeding generations, and Dr. King consistently warned us about this.

Finally, I wanted to explain the need today for a transformational figure like Dr. King, who used his voice, his stature, and his activism and service in defense of truth. King was emphatically the voice of truth and hope for America and the world in his time. Speaking truth to power, challenging America around the importance of living up to its constitutional principle of “self-evident truths,” and assuring us that the long arc of truth always prevails over untruth—that it is always bending and swinging in the direction of righteousness, justice, and peace for all humanity—were a vital part of Dr. King’s great charisma and appeal. Instead of trivializing King’s essential radicalism, and distorting and twisting his words against affirmative action and critical race theory, we would do well to heed his proclamations regarding the need to always value and elevate truth. In other words, Dr. King has much to teach us as we confront the challenges of this “post-truth age.”

Much like Dr. King, I grew up in the Black South during the days of de jure and de facto segregation. I, too, was raised in the culture of Southern Black Baptist Protestantism, the great-grandson, grandson, and son of Baptist preachers and God-fearing church women. I often heard from my elders the old saying “Practice what you preach,” which means that truth spoken means absolutely nothing if it is not truth lived and truth applied. In other words, truly moral persons do not say one thing while practicing the very antithesis of what they say in words. There must always be coherence between word and deed.

Frankly, I have not always honored this principle in my own life, but when I have done so, I have prospered while experiencing inner peace. I have witnessed and experienced throughout my life the power of truth to set people free—both the enslaved and the enslaver. I saw this during the civil rights movement, when I and so many others, Black and white, were transformed in positive ways morally, spiritually, physically, and otherwise by what we saw, participated in (marches, demonstrations, etc.), and experienced. The civil rights movement was in essence an example of truth lived and applied. It was in my judgment a crusade for the triumph of truth over untruth, and I was blessed to have some role in it. The power of truth became even more evident as I watched my parents and grandparents vote and as I witnessed the giant walls of segregation give way to desegregation and, in some limited fashion, integration.

During my almost forty years of teaching, in predominantly white academic institutions, I witnessed and experienced on yet another level the power of truth to prevail over untruth. These institutions had excluded Blacks from the ranks of their faculties and administrations for generations, based on racially inspired untruths, but they changed over time as I looked on with pleasure. The long arc of truth was always bending and swinging in the direction of justice and equal opportunity, which meant that humans of my race could no longer be rejected, excluded, and denied on the basis of age-old lies.

I have come to see truth as a positive, vital, constructive, and enduring force in the universe—a force that can never ultimately be defeated. Dr. King often said that “truth crushed to earth will rise again,” and this explains the course of much of my own life, especially as I consider it as it has unfolded from the days of segregation up to today.

What core message do you want readers to take away from The Arc of Truth?

That if we are to grow, survive, and flourish as a nation, especially as a multiracial, participatory, and representative democracy, we must learn again to cherish and elevate truth. Dr. King consistently urged America “to be true to what you said on paper,” meaning that those self-evident truths expressed in our Constitution and Declaration of Independence must become regulating ideals in our daily living.

I would want readers to know that Dr. King’s ideas about the power, durability, and ultimate triumph of truth, and how he gave expression to this in his own life, are still meaningful for us today. We have so much to learn in this regard from him, especially as we confront the challenges and uncertainties of this “post-truth era.”

You speak on this at length throughout your book, but could you discuss why King’s thoughts on the nature of truth are so pertinent at this moment in society?

Much of what I have already said applies here, but I would add more. Dr. King’s thoughts on the nature of truth are important for any society that is losing a sense of the shared value of truth. Dr. King is not only our most celebrated national hero—he is also the one critical resource that we should study more closely as we try to restore some sanity and rationality to our society—a society absorbed in falsehoods, hate, bigotry, intolerance, mass shootings, and death. Dr. King often said that no society can continue to exist on a foundation of lies, half-truths, deception, and violence. He taught us that truth is the lifeblood of any truly democratic, just, peaceful, and prosperous society and world.

Dr. King’s birthday is celebrated and/or recognized in some one hundred countries, and monuments to his memory exist in country after country, but it is far more important that we listen to his words, especially to what he said about speaking and witnessing to truth in the face of raw and immoral power, and about the power of truth to free all of us, the enslaved as well as the enslavers. 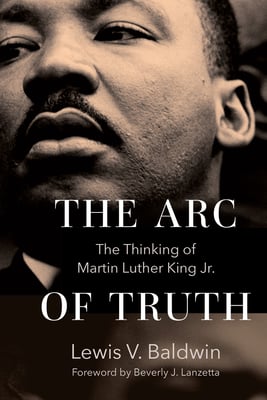 Click here to learn more about The Arc of Truth: The Thinking of Martin Luther King Jr. by Lewis V. Baldwin.