10 Books by Black Scholars to Add to Your Reading List 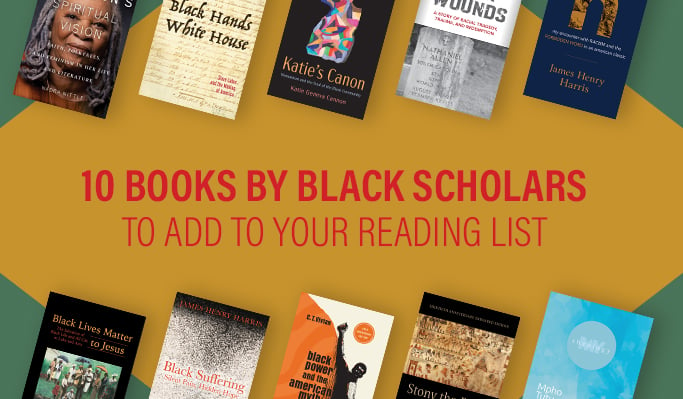 The lack of representation of Black scholars remains an ongoing issue. As part of our commitment to publishing scholarship that matters and continually celebrating our world's diversity, we highlight these books by preeminent Black theologians and thinkers. While this isn't an exhaustive list, it is a starting point. 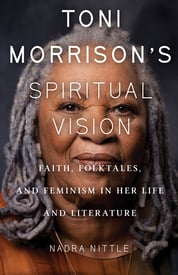 Faith, Folktales, and Feminism in Her Life and Literature

Morrison filled her novels with biblical allusions, magic, folktales, and liberated women, largely because Christianity, African American folk magic, and powerful women defined her own life. She grew up with family members who could interpret dreams, predict the future, see ghosts, and go about their business. Her relatives, particularly her mother, were good storytellers, and her family's oral tradition included ghost stories and African American folktales. But her family was also Christian. As a child, Morrison converted to Catholicism and chose a baptismal name that truly became her own--Anthony, from St. Anthony of Padua--going from Chloe to Toni. Morrison embraced both Catholicism and the occult as a child and, later, as a writer. She was deeply religious, and her spirituality included the Bible, the paranormal, and the folktales she heard as a child. 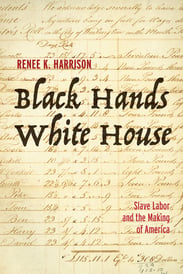 Slave Labor and the Making of America

Black Hands, White House documents and appraises the role enslaved women and men played in building the US, both its physical and its fiscal infrastructure. The book highlights the material commodities produced by enslaved communities during the Transatlantic Slave Trade. These commodities--namely tobacco, rice, sugar, and cotton, among others--enriched European and US economies; contributed to the material and monetary wealth of the nation's founding fathers, other early European immigrants, and their descendants; and bolstered the wealth of present-day companies founded during the American slave era. Critical to this study are also examples of enslaved laborers' role in building Thomas Jefferson's Monticello and George Washington's Mount Vernon. Subsequently, their labor also constructed the nation's capital city, Federal City (later renamed Washington, DC), its seats of governance--the White House and US Capitol--and other federal sites and memorials.

Given the enslaved community's contribution to the US, this work questions the absence of memorials on the National Mall that honor enslaved, Black-bodied people. Harrison argues that such monuments are necessary to redress the nation's historical disregard of Black people and America's role in their forced migration, violent subjugation, and free labor. The erection of monuments commissioned by the US government would publicly demonstrate the government's admission of the US's historical role in slavery and human-harm, and acknowledgment of the karmic debt owed to these first Black-bodied builders of America.

Read an interview with the author. 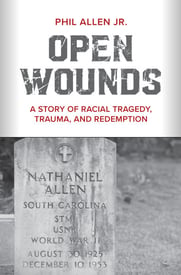 A Story of Racial Tragedy, Trauma, and Redemption

On December 10, 1953, tragedy was visited on a family when Nathaniel Allen was murdered on the Sampit River by his white employer, who lured him into the meeting under the false promise of reconciliation. Allen's death was recorded as an accidental drowning, a deliberate cover-up of the bullet hole seen by more than one witness.

Three generations later, Phil Allen Jr. revisits this harrowing story and recounts the "baton of bitterness" that this murder passed down in his family.

Through interviews, difficult conversations, and deep theological reflection, Allen takes up the challenge of racism today, naming it for what it is and working to chart a path toward reconciliation.

Open Wounds, and the documentary that accompanies it, is a transformative experience of listening and learning as a grandson looks, laments, an ultimately leads his family and his society forward toward a just and reconciled future. It's an essential part of our national reckoning with racism and injustice. 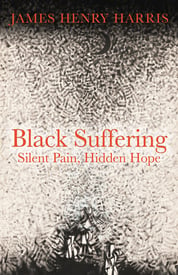 In Black Suffering, James Henry Harris explores the nexus of injustices, privations, and pains that contribute to the daily suffering seen and felt in the lives of Black folks. This suffering is so normalized in American life that it often goes unnoticed, unseen, and even--more often--purposely ignored. The reality of Black suffering is both omnipresent and complicated--both a reaction to and a result of the reality of white supremacy, its psychological and historical legacy, and its many insidious and fractured expressions within contemporary culture. Because Black suffering is so wholly disregarded, it must be named, discussed, and analyzed.

Black Suffering articulates suffering as an everyday reality of Black life. Harris names suffering's many manifestations, both in history and in the present moment, and provides a unique portrait of the ways Black suffering has been understood by others. Drawing on decades of personal experience as a pastor, theologian, and educator, Harris gives voice to suffering's practical impact on church leaders as they seek to forge a path forward to address this huge and troubling issue. Black Suffering is both a mixtape and a call to consciousness, a work that identifies Black suffering, shines a light on the insidious normalization of the phenomenon, and begins a larger conversation about correcting the historical weight of suffering carried by Black people. 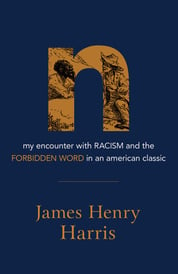 This book is about a Black man's experience of reading Mark Twain's classic Adventures of Huckleberry Finn for the first time while in graduate school. The story captures the author's emotional struggle with Twain's use of the racial epithet more than two hundred times in the text. Author James Henry Harris reports being relieved to come to the end of the semester of "encountering Twain's use of [the forbidden word] every week. . . . I was teetering on the brink of falling apart. . . . For the first time the class seemed to understand my painful struggle, and my plight as a Black man in class was a metaphor, a symbol of the past, present, and postmodern condition of American society."

This is a courageous memoir that wrestles with the historic stain of racism and the ongoing impact of racist language in postmodern society. The book is about Harris's flashbacks, conversations, and dilemmas spawned by use of the epithet in a classroom setting where the author was the only Black person. His diary-like reflections reveal his skill as a keen reader of culture and literature. In these pages, Harris challenges his instructor and classmates and inspires readers to redress the long history of American racism and white supremacy bound up with the N-word. He reflects on how current Black artists and others use the word in a different way with the intention of empowering or claiming the term. But Harris is not convinced that even this usage does not further feed the word's racist roots.

Read an interview with the author. 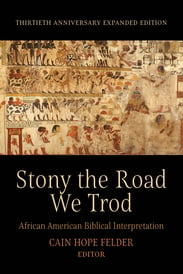 Stony the Road We Trod

The publication of Stony the Road We Trod thirty years ago marked the emergence of a critical mass of Black biblical scholars--as well as a distinct set of hermeneutical concerns. Combining sophisticated exegesis with special sensitivity to issues of race, class, and gender, the authors of this scholarly collection examine the nettling questions of biblical authority, Black and African people in biblical narratives, and the liberating aspects of Scripture. The original volume reshaped and redefined the questions, concerns, and scholarship that determine how the Bible is appropriated by the church, the academy, and the larger society today.

To the original eleven essays this expanded edition adds a new introduction by Brian K. Blount and three new chapters by Kimberly D. Russaw, Shively T. J. Smith, and Jennifer T. Kaalund. Not only does Blount's new introduction access the impact of the first edition, but the new contributions extend the implications of Cain Hope Felder's vision for the book. 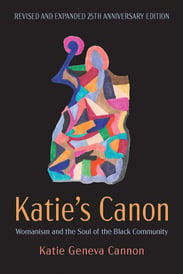 Womanism and the Soul of the Black Community, Expanded 25th Anniversary Edition

Katie's Canon is a selection of essays written for a variety of occasions throughout Cannon's celebrated career. This new edition contains three additional essays and a new foreword by Emilee Townes. The volume weaves together the particularities of Cannon's own history and the oral tradition of African American women, African American women's literary traditions, and sociocultural and ethical analysis. The result is a classic. Cannon addresses racism and economics, analyses of Zora Neale Hurston as a resource for a constructive ethic, the importance of race and gender in the development of a Black liberation ethic, womanist preaching in the Black church, and slave ideology and biblical interpretation. 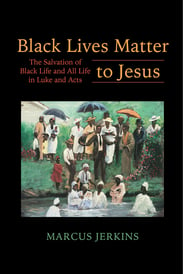 The third evangelist makes Black-skinned people central to his claim in Luke and Acts that the gospel of Jesus is restoring the children of God. Within Luke's literary environment, the identity of the children of God was linked to national/ethnic identity. Many Jewish texts argued for the Jews' position as God's children because they are bound to God by covenant; they are God's firstborn. But there is also a more general sense within this tradition that all human beings are made in the image of God and are, thus, the children of God through Adam. In the Gospel, Luke asserts that all nations and all ethnicities, including Israel, have questionable filial status vis-à-vis God. Both Israel and the nations are restored in status as God's children through Jesus, the Son of God.

In Acts, Luke explores the initial return of Israel and all ethnicities to God through the witness of the church empowered by the Spirit. To epitomize the return of all nations to God, Luke narrates the salvation of Black-skinned Africans. These Black lives are emphasized to signify that their representation in the church demonstrates the universal extent to which the salvation of Jesus Christ will reach. Their presence in the church is also meant to dignify their Black skin against an aesthetic bias that was prevalent in Greco-Roman views at that moment. This subversion of ethnographic bias helped Luke's audience sustain a gospel-centered critique against the devaluation of Black life. 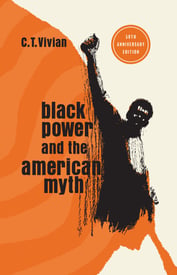 Black Power and the American Myth

In 1970, C. T. Vivian, a close colleague of Martin Luther King, Jr. and a member of his executive staff, sat down to take stock of the civil rights movement and the progress it had made. His assessment was that it failed, and that the blame lay in the existence of myths about America.

As prophetic today as it was 50 years ago, Vivian's voice rings out as a critique and a call to action for a society in deep need of justice and peace.

The civil rights struggle that began when Rosa Parks, a seamstress in Montgomery, Alabama, decided to sit in the front of a bus has deeply altered American society and the American conscience. Yet from several perspectives, that movement has resulted in failure. The Black struggle for independence is more of an uphill climb than ever. Why? 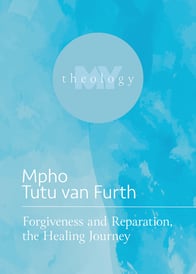 Forgiveness and Reparation, the Healing Journey

Forgiveness and Reparation, the Healing Journey is about reparations. We think of reparations as a remunerative act and as a punitive one. The colonial powers must pay back a significant percentage of what they stole from the colonized. To arrive at what would be a meaningful amount, we must tally up the cost of the human lives lost, the opportunities denied, the mineral wealth ravaged, and the ecosystems destroyed. How can we even begin to calculate the worth of even one of those categories? How can we rightly price even one human life? Furthermore, this approach assumes there is only one side in need of repair--the side of the subjects who were raped, ravaged, abused, misused, and had their lives and labor stolen. But reparations rightly engaged is part of a spiritual process of forgiveness and reconciliation. Reparations would be an element in a process of atonement and restorative justice that sees the need for acknowledgment of the damage done to the enslaved and colonized, healing and restoration of the lost humanity of the perpetrators, and repair of the violated relationships between the human and ecological victims and the human perpetrators.