Dr. Renee K. Harrison is the author of Black Hands, White House: Slave Labor and the Making of America. We sat down with Dr. Harrison to get a sense of how this work came together and understand why there should be a monument to slave labor on the National Mall.

I am a big fan of mythologist and literary writer Joseph Campbell’s work. His archetype of the hero and his or her great adventure story is a motif ingrained in America’s identity and formation. The story of brave, innovative, hard-working men and women of white ancestry who self-identify as explorers, patriots, and pilgrims, on a mission by God, set sail from Europe to chart new territories and later create a new world democracy. Yet, omitted from this single-storied account of American exceptionalism and heroism is the story seen or told from the place of those Brown and Black people slaughtered, displaced, kidnapped, purchased, and forced to help build, physically and fiscally, early America. We also selectively fail to tell a more nuanced story of the hero as a villain and hold them accountable for their crimes against humanity.

Who are the founding fathers really, and why do we refrain from telling a more nuanced story of their lives? Why do we exalt and memorialize them and other explorers, patriots, and pilgrims on our National Mall as one-dimensional heroic figures? Why do we omit the stories, legacies, sacrifices, and labors of the Indigenous peoples of the Americas and Black people, especially those enslaved in the US, from accounts about America’s origins and promise? Who benefits from a single-storied account? My hope is this work invites us to reflect deeper on these and many more questions.

Your book is a book one possessed by a vocation, a mission.  How did you balance the urgency of the book’s vocation with the careful, patent research which it represents?  Were there days of despair?  Were there days of hope?  Talk about the management of those two in the task of writing.

I must admit it was not easy at times. Working to balance, with integrity, the voices of those I wrote about while giving attention and care to my inner churnings of righteous discontent and heartache as I read stories and historical accounts. Why are human beings so cruel and non-courageous? Why do we feel threatened by the presence or the recognition of those outside the single-storied narrative? Why is violence against the Black-bodied people a normative response to white fragility and fear of displacement and disempowerment? These and other questions sat with me, day-in and day-out, as I mined through the lives of those contained in the book. Who benefits from a white-washed history?

Our lives are a tapestry of multivalent gifts and complex contradictions. No one is one-dimensional, and the full breadth of our lives is worth sharing. Therefore, we should not fear the underbelly of our origins and existence. On the contrary, they provide us an opportunity to see ourselves and each other clearer. That is patriotism and what gives me hope. What revives me daily is a deep well of ancestral presence and wisdom and historical data we cannot deny: Beautiful Black people helped build this country, soul-by-soul, brick-by-brick, state by state, day-by-day, decade-after-decade generation-by-generation, until finally a new republic and leading democracy. That is both exhilarating and powerful. When I drew from this well-spring daily in communion with these ancestral guides, the writing became manageable and profoundly necessary.

Black Hands, White House is far more than a book about buildings.  Yours is a story of capital and not just one of the US Capitol.  You reveal the economic impact of slave labor and not merely the work product.  And, yet your book ends with the call for a monument on the Mall.  So, why do monuments matter—and, in particular, why would a monument to slave labor in a particular place matter?

I think the answer to that question lies at the heart of America. Why did   monuments matter to the founding fathers, colonists, and early white settlers? Why was it essential and still essential today to Americans to see enshrined on our National Mall heroic figures carved and shaped into predominately white male figures? What is America saying to its citizenry about who and what is worthy of enshrinement and reverence?

For me, as an American, monuments matter. They are at the heart of e Pluribus Unum. Monuments speak to origins, shared heritages, patriotism, historical legacies and memory, and valuation and understanding of the past. What better people to represent America’s origins, heritages, patriotism, gifts, and valuation of our past, which created a present for all of us, than those captured and taken from their homeland, and forced to labor against their will. Who better than those patriots that sacrificed all they had and, in return, received little to no recognition and monetary compensation and withstood violent rebuke at every turn while building this nation? They matter. We should recognize their contributions to this nation in the form of a monument on the National Mall. Their enshrinement should stand alongside other memorials. 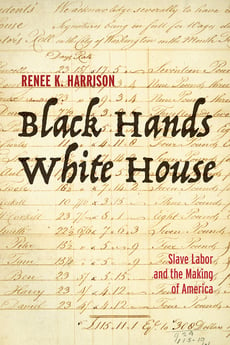 Renee K. Harrison is an associate professor of African American and US religious history at Howard University. She joined the School of Divinity faculty in the fall of 2010. She is the author of "Enslaved Women and the Art of Resistance in Antebellum America" (Palgrave Macmillan, 2009) and coauthor, with Jennie Knight, of "Engaged Teaching in Theology and Religion" (Palgrave Macmillan, 2015).