Born Chloe Ardelia Wofford in 1931 in the ethnically diverse steel town of Lorain, Ohio, Morrison grew up hearing the stories of Mexican, Italian, and Greek immigrants, often marveling at them. But nothing topped how fluidly her relatives used language, and she wanted her fiction to reflect their verbal dexterity.

“When something terribly important was to be said, it was highly sermonic, highly formalized, biblical in a sense, and easily so,” Morrison recalled of her family. “They could move easily into the language of the King James Bible and then back to standard English, and then segue into language that we would call ‘street.’”

Morrison’s family took pride in the fact that her grandfather read the Bible five times from cover to cover. With reading materials limited—”there were no books, no libraries”—the Bible was the only book available to him, and his decision to read the Scriptures amounted to “taking power back,” since it had been illegal for enslaved African Americans to read. Following her grandfather’s example, Morrison’s parents had books throughout their household. “That was like resistance,” she said, but the Bible remained the family’s literary foundation.

At the core of Morrison’s literature is the Black community, and at the heart of that is African American religion, as it was in her family. Black America regarded Christianity as a belief system of liberation and wed it with West African oral, spiritual, and folk traditions. This religious sensibility shapes the stories Morrison chose to tell, how she told them, and the characters within them. In her effort to capture how the African Americans she knew conversed, worshipped, healed, loved, and told their own stories, Morrison created a literary universe in which the supernatural and the church coexist with the dual horrors of racial oppression and misogyny. Her engagement of the spiritual world allowed Morrison to focus on Black characters, particularly women, whose otherworldly gifts empower them in a society determined to strip them of their agency.

She wrote novels, she said, that reflect the shrewd decisions Black people make to survive, all while experiencing “some great supernatural element.” In her books, as in life, faith in the invisible—be it in God or magic—”make the world larger” for African Americans. 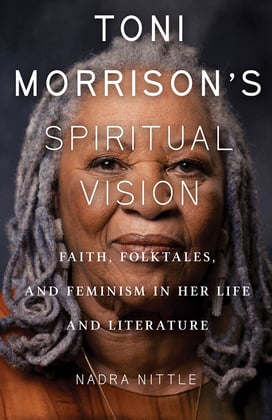 Nadra Nittle is a Los Angeles-based journalist who has been a staff writer for Vox Media, Digital First Media, and the Gannett/USA Today network. Her writing has also appeared in The Atlantic. The Guardian, Salon, and religious magazines. She is the author of "Recognizing Microaggressions" (2019).