The Execution of Nathan Hale 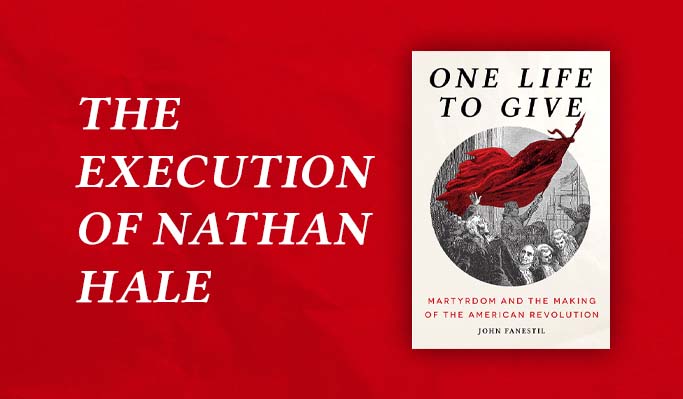 A brief excerpt from the introduction One Life to Give: Martyrdom and the Making of the American Revolution by John Fanestil paints the portrait of the devotion of young men to the Revolutionary cause.

In early September 1776, Nathan Hale, a captain in the Continental Army under George Washington’s command, volunteered to enter British-occupied New York as a spy. Hale had graduated from Yale College three summers earlier at the age of eighteen. After working for a year and a half as a schoolteacher, he had enlisted in Connecticut’s colonial militia, which was incorporated into the Continental Army at the start of 1776. By September, Hale had been soldiering for some sixteen months but had seen no formal battlefield action. He was twenty-one years old and was ready to act. Hale entered New York on September 17 and was captured four days later. On September 22 he was executed by British troops under the command of General William Howe. His corpse hung for three days before being cut down.

The precise locations of Nathan Hale’s capture, execution, and burial cannot be confirmed. Neither does evidence survive that Hale spoke the words for which he would be immortalized in the lore of the American Revolution: “I regret that I have but one life to lose [or ‘one life to give’] for my country.” The saying conjures Joseph Addison’s Cato, one of the most popular plays of the eighteenth century, in which the play’s title character, considering the corpse of Marcus, his soldier son, declares, “How beautiful is death when earned by virtue. Who would not be that youth? What pity it is that we can die but once to serve our country!” While it is possible that Hale spoke these words—or words like them—at the time of his execution, they were probably attributed to him after the fact. After all, the story of Hale’s death did not circulate widely, nor was he included regularly in the pantheon of Revolutionary heroes, until Jedidiah Morse included him in his popular 1824 Annals of the American Revolution.

What we do know about Nathan Hale’s execution, however, is intriguing. According to one British soldier who witnessed the event, Hale expressed regret that he “had not been able to serve my country better,” and with “great composure and resolution,” he encouraged his captors “to be at all times prepared to meet death in whatever shape it presented itself.” Another recalled that Hale was “calm, and bore himself with gentle dignity, the consciousness of rectitude and high intentions.” And yet another reported that “the frankness, the manly bearing, and the evident disinterested patriotism of the handsome young prisoner, sensibly touched a tender chord of General Howe’s nature.” Clearly, in his final hours, Nathan Hale fulfilled expectations of bravery in the face of death that were revered among soldiers of his generation.

Which inspires the following question: What animated so many young men—young men like Nathan Hale—to risk sacrificing their lives for the Revolutionary cause? 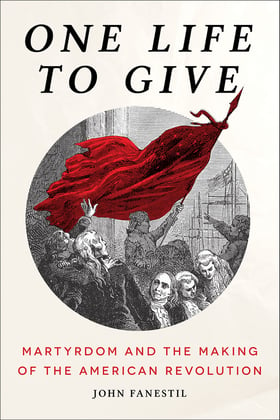 This is excerpt from the introduction of One Life to Give: Martyrdom and The Making of the American Revolution.

John Fanestil earned his PhD in history from the University of Southern California, and is a graduate of Dartmouth College; Oxford University, where he studied as a Rhodes Scholar; and the Claremont School of Theology. He is an ordained elder in the United Methodist Church and has served several churches in Southern California. He is author of Mrs. Hunter's Happy Death: Lessons on Living from People Preparing to Die (2006).