The Magi: Who They Were, How They’ve Been Remembered, and Why They Still Fascinate 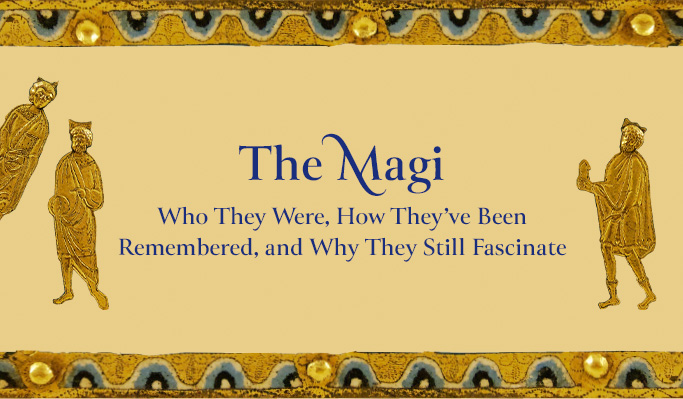 On the fourth Thursday of November, many residents of the United States celebrate “Thanksgiving,” a national holiday during which tables around the country are filled with turkeys, casseroles, and some variety of cranberry relish that simultaneously mystifies and comforts. Intended to celebrate the good fortune of the Puritans who arrived on the eastern shores of North America in the early 1620s, Thanksgiving in the United States also coincides with the start of the Christmas season. And so, in the wake of the Thanksgiving meal, many families begin decorating their homes with lights, trees, and of course, nativities.

A nativity is a miniature representation of the birth of Jesus. Some are small enough to sit atop the mantel of a fireplace, while some are large enough that they do better in the front yard. Details vary, but all nativities share the same basic scene and cast of characters. Imagine a nativity in your mind. Place yourself within the scene. Where are you? Who is there with you? What are people doing?

Next, let’s ask the question of who (and what) is there with you. We can start with the obvious cast of characters. Jesus is there (it’s his birth, after all!), and you probably imagined Mary, his mother, kneeling nearby. His father Joseph stands somewhere off to the side, perhaps looking a bit disinterested or even confused. But who else was there? Was there an angel? Were there farm animals? A donkey, perhaps? Maybe a few lambs? An ox? What about other humans? Are there shepherds? If so, how many? How are they dressed? What are they doing? Do you see anyone else? Anyone at all?

You also likely saw three older men somewhere in the scene. They were either riding in on camels or kneeling before the newborn Jesus. It is possible that they were dressed in elegant, exotic clothes, vastly different from what others in the scene are wearing. They may have been wearing crowns, and they may have had a darker skin tone than other people in the scene. You probably imagined each of these men holding some sort of elaborately decorated container, and you probably are not surprised that they appeared in your vision. I’m not surprised either. After all, you are currently reading a book about them.

Strangers from the East

The gift-bearing strangers who visit Jesus after his birth are an integral component of the traditional Christmas story, and any nativity would seem incomplete without them. Aside from Jesus, Mary, and a handful of others, there are few characters in the history of Christianity who have exercised a more profound influence on our collective imaginations. Their story has been told and retold for centuries, in many kinds of media and for a variety of purposes. Outside of the  New  Testament,  they  appear  in  several  early  Christian  texts,  both as characters and as sermon illustrations. They have captured the attention of artists and inspired thousands of paintings, mosaics,  and  sculptures.  They  go  by  different  titles  and  names.  Some  people refer to them as “the wise men,” while some prefer “kings.” Still  others  may  have  grown  up  referring  to  them  as  “sages”  or  “astrologers” or by their traditional names: Caspar, Melchior, and Balthasar. But in the New Testament, they are simply “Magi.”1

The fact that the Magi feature so prominently in the Christian tradition would seem to suggest that they are major characters in the New Testament. But this is not the case. The story of Jesus’s birth appears in two of the four New Testament Gospels—Matthew and Luke—and the Magi  appear  in  only  one  of  them.  Luke’s  Gospel  begins with a dedication (Luke 1:1–4), the announcement to Elizabeth and Zechariah of the birth of John the Baptist (Luke 1:5–24), the announcement to Mary of the birth of Jesus (Luke 1:26–38), Mary’s  visit  to  Elizabeth  (Luke  1:39–56),  and  the  birth of John the Baptist (Luke 1:57–80). Joseph and Mary then begin their trek from Nazareth to Bethlehem to register in a census, and while they are  there,  Mary  gives  birth  to  Jesus.  She  uses  a  feeding  trough  as  a cradle, since “there was no place for them in the inn” (Luke 2:7 NRSV). After this, angels announce the birth to nearby shepherds, and the shepherds travel to Bethlehem to visit (Luke 2:8–20). Luke’s account of Jesus’s birth ends without even a hint of any Magi coming to visit.

Matthew,  by  contrast,  begins  with  a  lengthy  genealogy  that  traces  Jesus’s  family  line  back  through  King  David,  all  the  way  to  Abraham  (Matt  1:1–17).  The  goal  of  this  genealogy  is  to  establish  in the reader’s mind that Jesus’s story is inseparable from the story of Israel and to emphasize that Jesus is a descendant of King David. Matthew  then  introduces  Mary  and  Joseph.  The  couple  is  not  yet  married,  but  Mary  is  pregnant  (Matt  1:18).  Joseph  is  troubled  by  how to handle the situation until an angel comes to him in a dream and tells him, “That which is begotten in her is from the Holy Spirit” (Matt  1:20).  Joseph  and  Mary  then  wed  and  Jesus  is  born  shortly  thereafter. It is at this point that Matthew tells the story of the Magi.

Matthew’s  story  of  the  Magi  spans  twelve  short  verses,  and  within  those  twelve  verses,  details  are  sparse.  The  Magi  come  to  Jerusalem and Bethlehem “from the East” (Matt 2:1). They are led there  by  a  star,  and  their  intention  is  to  honor  a  king  (Matt  2:2).  They have a brief run in with King Herod before they make it to Jesus (Matt 2:3–8), and after they present their gifts of gold, frankincense, and myrrh, they are warned by an angel to go home by a different route (Matt 2:11–12). Neither the Magi nor their gifts are mentioned in the remainder of Matthew’s Gospel. If you removed these  twelve  verses,  you  would  hardly  know  that  they  had  been  there  in  the  first  place. Put  simply,  Matthew’s  story  of  the  Magi  contains a lot less than most readers remember.

So who are the Magi in Matthew? How many are there? Where do they come from? What is the nature of the star that leads them? Why are they interested in Jesus? What made them choose these specific gifts? Why does Matthew bother to tell their story in the first place? What’s the point? All these questions are important, yet Matthew doesn’t address any of them explicitly. Instead, he leaves it up to his readers to connect the dots. Various attempts to do just this have produced no shortage of reasoned studies and wild speculations, and for nearly two thousand years, the Magi have journeyed through the minds of authors, readers, theologians, biblical scholars, and artists. This is a book about that journey. 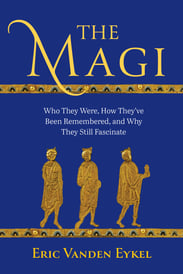 This is an excerpt from the introduction of The Magi: Who They Were, How They’ve Been Remembered, and Why They Still Fascinate.

Eric Vanden Eykel is associate professor of religion and the Forrest S. Williams Teaching Chair in the Humanities at Ferrum College. He is the author of "But Their Faces Were Looking Up: Author and Reader in the Protoevangelium of James" (2016) and is a general editor of the Journal for Interdisciplinary Biblical Studies. He lives in Roanoke, Virginia.