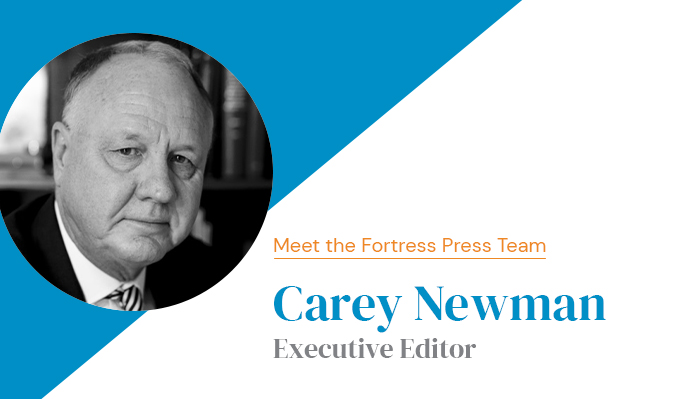 Carey Newman is executive editor at Fortress Press and is actively acquiring in biblical studies, ancient Near East studies, Second Temple Judaism, early Christianity, and Christology. Prior to joining us at Fortress, he was the director of Baylor University Press.

How did you end up in publishing?

It was an accident—pure and simple. While I was playing a round of golf one day, Marty Soards (Louisville Presbyterian) said, “You would make a good editor.” He called his former college roommate, Davis Perkins, who was then the president and publisher of Presbyterian Publishing, and within a week or two I had a job at Westminster John Knox Press as an editor.

Why have you decided to stay in publishing?

For all the money and fame, of which there is so much 😊! Seriously, once ink gets in your blood, it is very hard to wash it out. I have found vocation in helping others imagine and realize their books.

What’s something you wish authors knew when getting into the publishing process?

That a dissertation is not a book, nor is a book a journal article writ large. A book is not reducible to its argument. A book is a story about a subject that insists a set of truths upon its readers.

How many books do you estimate you’ve had a hand in publishing? And which books have you worked on that have stuck with you the most?

I have had the privilege of being the midwife to over eight hundred books. That’s a lot. And thus it’s hard to pick any favorites. Choosing among my authors is akin to choosing which of my children I love most—even if Eliza thinks it’s her.

I’ve heard that you’re working on a book of your own! Can you tell us a bit about it?

You have good intel. Yes, I am working on a book that addresses the artistry of academic writing. This will not be a “how to.” There are plenty of those to be found—and some of them are even good😊. Mine is more of a poetic grammar. We will see. Like all books when being written, mine still makes its home in shadows of impossibility.