Face Your Fears to Free Your Soul 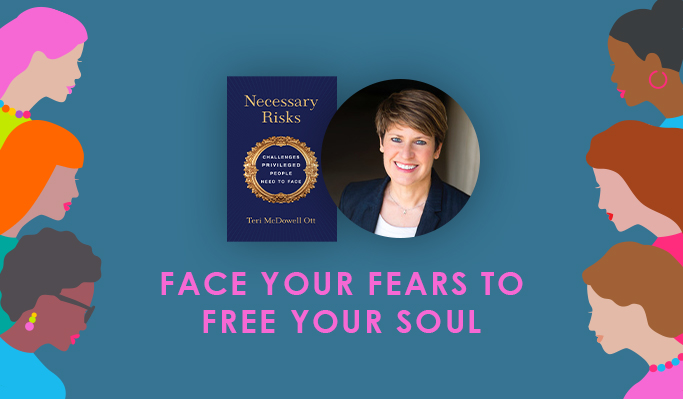 Fear has always been my nemesis. My childhood was shaped by a painful shyness, panic attacks, and irrational phobias. Too afraid to raise my hand and call attention to myself in elementary school, I peed my pants and sat the class out in a puddle of shame. Fearing the embarrassment of falling asleep in my high school classes, I’d go to bed hours early, toss and turn, then work myself into a panicked fit that would keep me awake later than if I’d gone to bed on time. It would be decades before I learned that the overwhelming emotions I experienced before a big sporting event, or a required speech at school, or at night while trying to go to sleep were panic attacks that I would eventually learn to manage. Until I learned this, though, I was a mess—an awkward, insecure girl whose fear dictated and controlled her life.

An experience during my junior year of college changed my course. One evening, I sat cross-legged on the navy-blue bedspread of my dorm mattress reading a book that I was too embarrassed to tell anyone about—some light fiction about a modern-day Jesus. I’d always been interested in religion and was raised in the Presbyterian Church. But I didn’t want anyone to think I was religious or some sort of “Jesus freak,” so I kept my faith to myself.

The book was open and turned upside down against my bedspread’s pattern of tiny pink roses. My face in my hands, I sobbed and heaved for air, overcome by what I had just read. I can’t remember the exact text, just the recognition, the feeling, the sudden knowing that God wanted more from me and for me than the life I imagined for myself.

I had started to come out of my shy shell in college, but not enough to take Jesus seriously when he first suggested I follow him to seminary. Oh, Jesus, what a riot. He had to be joking, right?

My Presbyterian Church background led me to assume that people who go to seminary have to become pastors who don long black robes and speak with moral gravitas from tall pulpits. At that point in my life, I was still afraid to speak to boys.

I fought Jesus hard, doubting that I had what it took to be any kind of religious leader. But Jesus was relentless. In the days that followed, I couldn’t stop thinking about seminary. I was scared but also curious, wondering what it would be like, wondering what I might be like in that new space. Jesus didn’t allow me any relief—no excuse was good enough. The negotiations were difficult and fraught, and in the end, my twenty-year-old self issued an ultimatum that felt reasonable: “OK, Jesus, I’ll do this one thing. I’ll go to seminary. But don’t expect much more than that. Don’t expect me to be someone I’m not or become some kind of pastor who speaks, out loud, in front of people. I’m just going to go, take some classes, then get back to my life. OK? OK.”

As it turned out, seminary was the right move. I loved studying Scripture and theology and pastoral counseling. But when I was called to speak in class or invited to preach from an actual pulpit, my fear took over, and I panicked. In these agonizing moments, I’d pray desperate prayers and get frank with God. “What the hell were you thinking?” I’d accuse the One who I believed got me into this mess. “Why couldn’t you have called me to some quiet cubicle somewhere?”

God doesn’t help my anxiety much in these fear-filled moments. Cortisol rushes to my brain, and the Holy Spirit doesn’t come in an antidepressant form. What did help was a growing impatience with having spent too much of my life in hiding. I wanted out. I wanted to be liberated from the fears that kept me captive.

In my studies, I discovered feminist theologian Susan Nelson Dunfee’s classic article “The Sin of Hiding,” which critiques Reinhold Niebuhr’s doctrine of sin. Niebuhr emphasizes pride as the primary sin and promotes self-sacrifice as the way to self-transcendence. Nelson Dunfee argues that this approach negates what she sees as the primary sin of woman: the sin of hiding. In order for a woman to know self-transcendence—to know her full humanity—she must confess to the sin of hiding, stand “exposed in her insecurities and self-doubts, revealed in her true vulnerability, so she can learn how to cope either with her own shortcomings, or with her talents and desires.” In this way, “the woman is on the record; she is given a forum, an arena, a life to be lived.”¹

Nelson Dunfee’s words resonated deeply with me. Since then, I have been slowly untangling myself from all that has kept me in hiding. As a young seminarian, it was hard to ignore the voices in my head saying that I didn’t have much to give—that I certainly didn’t have anything to say worthy of a pulpit. Even now, I am still learning to trust the people who encourage me—and the call that keeps urging me out of hiding toward more.

In his book Be Still and Get Going: A Jewish Meditation Practice for Real Life, Rabbi Alan Lew shares the two different words for fear used in the Hebrew Bible. Pachad, Lew explains, is imagined or projected fear, being afraid of something we think might happen but likely won’t. Pachad describes the irrational worst-case scenarios we conjure, like my nightmares about people laughing and mocking me as I preach.

According to Lew, the second Hebrew word for fear is norah. This is the fear we experience when we come into the presence of the Divine. The book of Psalms frequently refers to this fear as the appropriate way to approach and be in relationship with God: “Happy are those who fear the Lord” (Ps 112:1). “The fear of the Lord is the beginning of wisdom” (Ps 111:10). But Lew also explains norah as the fear that overcomes us when we find ourselves in a larger space than we are used to or experiencing an energy we hadn’t felt before. Norah is what we feel when we come out of hiding, laying ourselves bare to the moment, the opportunity, the experience of being more and being in the presence of More. 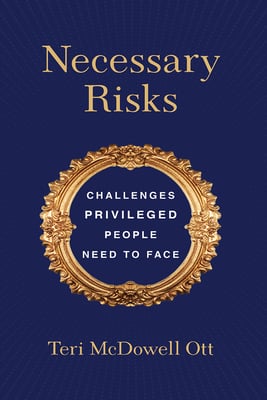 This is an excerpt from the introduction of Necessary Risks: Challenges Privileged People Need to Face.

Rev. Dr. Teri McDowell Ott has been an ordained Presbyterian (PCUSA) minister for over twenty-two years. After receiving her Master of Divinity degree from Louisville Presbyterian Theological Seminary she served the church in a variety of pastoral positions. In 2008 she completed her Doctor of Ministry degree from McCormick Theological Seminary. She served Monmouth College as Chaplain from 2011 to 2021 and recently accepted a new call as Editor of The Presbyterian Outlook. Inspired by her work with college students and her experience volunteer teaching in a men’s prison, Teri wrote, “Necessary Risks: Challenges Privileged People Need to Face” (Fortress Press, 2022).