Discover the Origin and Evolution of an Extraordinary Icon

In the early years of this century, when America was renegotiating both faith and power, an exhibition of that title came to Manhattan’s Metropolitan Museum of Art. Still reeling from the September 11, 2001, attacks, the city was now hosting icons from the Eastern Roman (a.k.a. Byzantine) Empire, which had lasted approximately from 330 to 1453 CE.1 The Byzantines had endured similar calamities on an increasingly frequent basis as they approached their demise, and the icons glowing in the darkened rooms of the Met were veterans of this civilizational collapse.

Unable to keep pace with the new methods of weaponry that would eventually destroy the empire, late Byzantines instead forged new methods of prayer, the kind of prayer that only arises when a world is coming to an end. This Christian yoga of sorts, including special breathing techniques and postures, was known as “hesychasm,” from the Greek word hesychia, which simply means “silence.”2 Icons like the ones at the Met that year were the fruit of this late- blossoming tree of prayer. They were therefore nothing like the other art in the museum. They were bricks of golden light dense with the wisdom of another age, antidotes to American triumphalism, tutorials in grief.

I was then a seminary student, and the best theological ideas I was learning about were materialized in this exhibition. The incarnation was an idea in the classroom, but here it had a face. The figures I had become familiar with in church history class were here, literally: one tiny mosaic of the suffering Jesus was ensconced by a surrounding mosaic of his suffering saints. I do not mean the mosaic of Christ was surrounded by pictures of those saints; rather, he was surrounded by fragments of their actual bodies, wrapped in silk, neatly labeled and preserved in cubbyholes that created an enclosing chessboard around the Man of Sorrows. But whether the icons in this show contained body parts of saints departed, each icon was freighted with presence nonetheless. Which is to say, the Faith and Power exhibition introduced me to a power that my faith lacked. The icons overran my cerebral defenses just as the Ottomans had once overran the civilization from which these icons had emerged. In a world that was grieving a shattered architectural icon, these icons forged a footpath through the ruins that avoided resentment or revenge. I might have fled to the Met’s contemporary art collection for a break from what these icons demanded, but it was too late. Shortly after my visit to that Manhattan exhibition, I switched my field of study from theology to Byzantine art.

Soon I felt enough in command of the material to offer a talk on the subject as a graduate student at the Princeton University Art Museum. In the Q and A session afterward, I was asked about a large Cretan icon hovering behind me during my talk, a marvelous example of the type known as the Virgin of the Passion (fig. 0.1). But before I could conjure an answer to the question, an anonymous woman offered one for me instead. “That’s Our Lady of Perpetual Help,” she blurted out, and then— embarrassed by her interruption— she scurried away. This, it turns out, is the icon’s second name, though I had heard neither of its names before.

Figure 0.1. The Virgin of the Passion (Our Lady of Perpetual Help) at the Princeton University Art Museum.

That woman’s preemptive declaration in the museum was the beginning of this icon’s hold on me, a hold that has always been as gentle as the way that Mary holds Jesus in the image itself. If I occasionally use the words she or her to refer to the icon, it is on account of the relationship I have developed with the image over time, not because of any fetishizing psychological projection I am conscious of, still less because I believe wood or pigment to be actually alive.3 In the course of my research, when my wife and I lost a child in a late miscarriage, there was something in the traditional icons of Virgin and Child that seemed discordant. Mary’s fecundity almost mocked our barrenness. But in the Virgin of the Passion, the angels above do not bear glad tidings of a birth announcement. Instead, they bear the cross, spear, and sponge, testifying that Mary would lose a child as well. The icon’s ability to address pain seems to be its secret, partly explaining why it has proliferated so dramatically throughout the globe. The image, I slowly learned, was saturated not with tidy answers to suffering but with hesychia, a silent presence that was answer enough.

To study this icon is to study not just one particular object but a much broader category of an icon “type.”4 So long as the image contains the Virgin and Child with the angels hovering above with the instruments of the passion, a given image qualifies— for my purposes— as a Virgin of the Passion. I visited her original haunts in Cyprus, Crete, Constantinople (now Istanbul), and especially Saint Catherine’s monastery at the foot of Mount Sinai in Egypt, where so many such icons are kept. But I was surprised to discover the Virgin of the Passion everywhere else as well. In fact, I encountered the image in so many unexpected places, from convenience stores to contemporary art exhibitions, that soon I stopped being surprised when I encountered the image and settled into expecting her instead. After all, her major shrines are scattered throughout the globe: Brooklyn, Boston, Curitiba, Manila, Cairo, Chicago, Singapore, and Mexico City (to name just a few). Lesser churches and schools devoted to this particular image are frankly innumerable, such that it has been called “perhaps the most popular religious icon of the twentieth century” and possibly of the present century as well.5 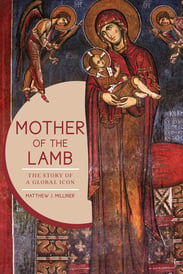 This is an excerpt from the introduction of Mother of the Lamb: The Story of a Global Icon.