A Summary of The Herods by author Bruce D. Chilton 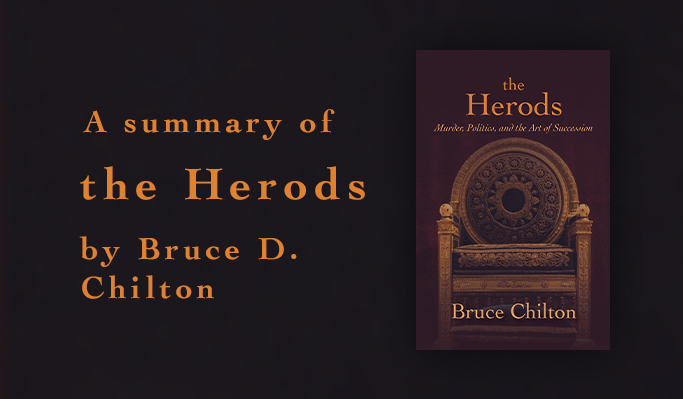 Bruce D. Chilton, author of The Herods: Murder, Politics, and the Art of Succession sets the stage of who is who in the Herod family and lays out the political context during the most chaotic century in Judaism.

Like a series of waves, the Herods rolled through the lands of territorial Israel. Herod the Great; his father, Antipater; Herod’s sons, Archelaus, Antipas, and Philip; his extraordinarily lucky grandson, Agrippa; and his great-grandchildren, Bereniké and Agrippa were all forces unto themselves, breakers that threatened what stood in their way. Yet they also were part of a single dynastic complex, whose force is explicable not only in terms of their talent and ambition and drive (all of which remain astonishing) but also on the basis of Rome’s projection of its might, and of Judaism’s capacity to fashion a modus vivendi with Rome. Showcasing their practice of Judaism in a way that was selective but often highly visible, the dynasty produced the last kings of Judea, whose command extended over the land of Israel and the temple in Jerusalem.

Herod’s father, the Idumean clan leader Antipater, deftly threw his support to Julius Caesar, once he was freed from a previous alliance when Pompey the Great was killed. He intervened in Egypt with thousands of troops—pressing west on horseback from Idumea with his own soldiers as well as affiliated mercenaries he convinced to join him[i]—in order to augment Caesar’s forces in Egypt and to offer the mobility of which Antipater was the master. In the volatile fighting between Caesar’s small but well-trained army and rival groups of Egyptian soldiers and mercenaries, the Idumean’s capacity to strike quickly with light, concentrated force offered a key tactical advantage. Even as he fought in a bloody campaign, Antipater also engaged in propaganda to endorse Caesar’s reputation for the favorable treatment of Jews.

The victorious Caesar passed through Syria, the keystone of Roman power in the Near East, in a majestic victory procession in 47 BCE. He appointed governors of whose personal loyalty he was certain, and Antipater had every reasonable expectation of preferment. But an opponent named Antigonus made a claim for his own appointment to office. He appeared before Caesar and accused Antipater of willful violence and personal profiteering under the cloak of service to Rome.

At this time, Antipater carried wounds and bruises from his combat in Egypt that covered his torso and arms, and he stripped off his clothing to reveal them. His loyalty to Caesar, he said, needed no words of proof, unlike that of Antigonus, decades junior to Antipater, who stood beside him dressed in immaculate linen and displaying only his attitude of entitled ambition instead of the proof of scars.

In a single moment, Antipater founded the basis of a dynasty by mastering a volatile situation with theatrical assurance grounded in sure military and political calculation. His grand gesture was an early manifestation of the Herods’ gift for public spectacle calculated to serve the state and their own interests. He could not have known that one day, his son Herod would stand before the Roman Senate to receive the diadem of rule from the hands of Mark Antony and Octavian, but he would readily have seen the family resemblance with his own command of astute public spectacle. With audacity, Antipater combined in the face of trial a total commitment to his own position together with a fierce loyalty to his allies. At many points in his life and in the lives of his descendants, the capacity to invest an action with complete dedication turned difficult situations to advantage, making survival and advancement possible even under adverse conditions.

Claims of theocracy, ancient and modern, have been articulated across a spectrum running from simplistic brutality to exquisite sophistication. Political assertions of divine mandate as played out by the Herods and their contemporaries epitomize that rich diversity and also reveal models of how God is involved in governance that continue to be part of the contemporary political scene. The principal actors on the whole did not engage in theoretical reflection or set out to implement preconceived political ideologies. That helps explain how differing and sometimes self-contradictory ideologies could be embraced in short succession or concurrently, on occasion by a single ruler. Conceptual engagement for these rulers was not a prerequisite of governance and might even get in the way of success.

Over time, those who reacted to the pressure of Herodian governance from Judaic or Christian perspectives, at best at the margins of power and frequently excluded from it altogether, have through a literature that ranges from endorsement to dissent exerted greater influence than the Herodians themselves. By a process that began during the rule of Herod’s son Antipas, the least of these perspectives—that of Jesus in the period that concluded with his crucifixion—became associated with the authority of the state to a degree unimaginable to observers during his time. The origins of that strange triumph cannot not be comprehended apart from a grasp of how the Herods wielded their power. 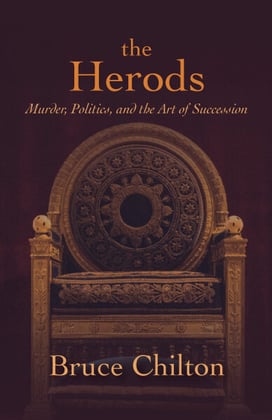 Click here to learn more about The Herods: Murder, Politics, and the Art of Succession by Bruce D. Chilton.

Bruce D. Chilton is the Bernard Iddings Bell Professor of Religion at Bard College, where he has taught since 1987. In addition to his many celebrated publications on the texts, practices, and beliefs of ancient Judaism and Christianity, he is also the author of Rabbi Jesus: An Intimate Biography (Doubleday, 2000)